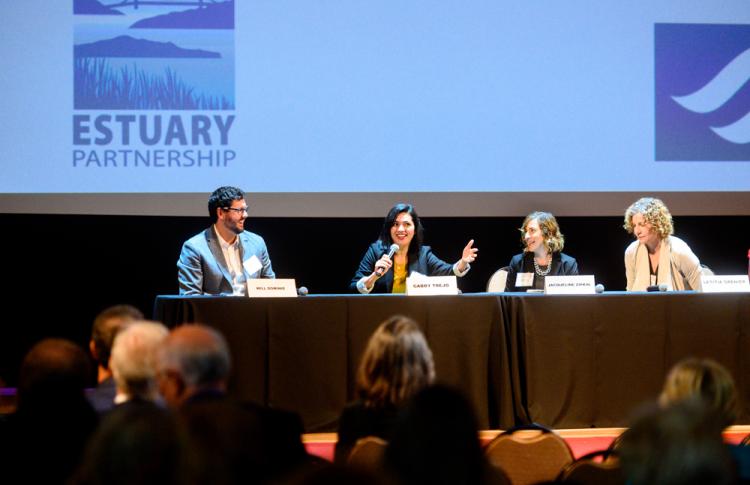 State of the San Francisco Estuary conference Monday, in Oakland.

Resiliency is the key issue highlighted in the State of the Estuary Report issued Monday by the San Francisco Estuary Partnership.

This is the first report on the health of the San Francisco Bay/Sacramento-San Joaquin Delta Estuary since 2015. It’s being issued as the two-day, 14th biennial State of the San Francisco Estuary Conference gets underway at the Scottish Rite Center in Oakland. The report can be found at www.sfestuary.org/our-estuary/soter.  A video on the report is here.

Resilience and Vulnerability. For the first time, this report looks at measures of landscape and community resilience across the estuary, including a new map depicting the following findings:

“Our region is getting hotter, more fire prone, and more susceptible to flooding, as well as less livable for many,” said Caitlin Sweeney, executive director of the San Francisco Estuary Partnership. “These new indicators help us assess our resilience to these new challenges and new extremes.”

The report also notes the human health benefits of access to green space and nature. Residents of disadvantaged communities, on average, have less park space per person within a half-mile walk from their homes, compared to the rest of the population in the Bay-Delta region.

“We need more investment in creative ways to use and restore flows for environmental health, to expand and build resilient shorelines by raising land elevations, and to weave considerations of social equity more strongly into efforts to improve environmental health,” said J. Letitia Grenier of the San Francisco Estuary Institute, the report’s lead scientist.

Fish Communities. The report finds that fish communities in the San Francisco Bay are slowly declining, despite being in generally good condition. This is the first time this trend has been detectable in the Bay and appears to be a slow, long-term decline that began in the 1980s. This finding is based on data from off-shore monitoring and may not reflect benefits to fish from wetland restoration at the edges of the Bay. In contrast, native fish populations in Suisun Marsh and the Delta have been declining for some time, though the proportion of native fish in the Suisun Marsh has improved over the last five years.

Urban Water Conservation. Urban areas in the Bay Area and Delta met and exceeded mandated conservation measures during the drought.  Post-drought, the conservation largely has continued. This finding shows that people in our region change their behaviors in response to environmental issues. Per-capita water use in the San Francisco Bay Area declined by 27 percent over the 32-year evaluation period, while per-capita water use in the Delta and Suisun region declined by 31 percent over a 13-year evaluation period.

“It is our residents, teachers, students, business owners and local communities who will really decide the Estuary’s health by becoming part of the solution, as we have shown in the report,” Sweeney said.

San Francisco Bay is the largest estuary — about 400,000 acres — on the Pacific Coast, and it is widely recognized as one of North America’s most ecologically important estuaries. It accounts for 77% of California’s remaining wetlands, providing key habitat for a broad suite of flora and fauna — over 1,000 species of animals, including wintering shorebirds and other native and conservation status species.