Bay Trail Contest Winner gets "lost in the actual beauty of the Bay.” 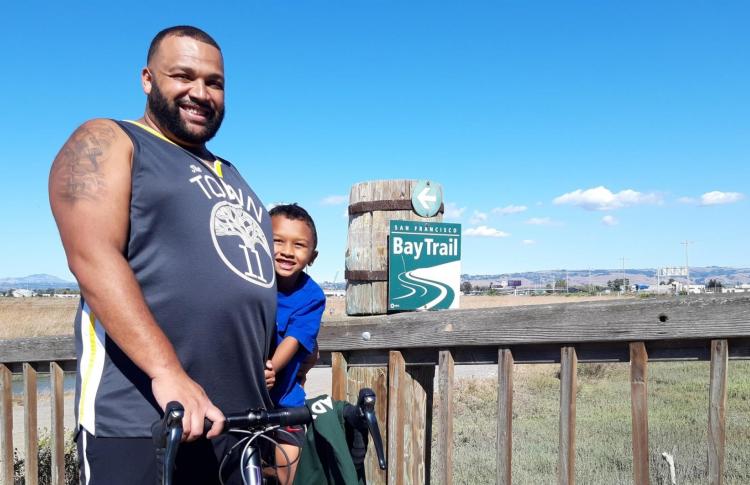 Instagram user and "Share Your 30” contest winner Maxwell Corleone with his son at the Hayward Shoreline Interpretive Center.

Maxwell Corleone of Hayward first explored the San Francisco Bay Trail through a middle school science club biking from the San Leandro Marina to the Hayward Shoreline Interpretive Center without ever needing to go on a street.

He's been exploring the Bay Trail ever since. The trail puts him in touch with the environment and the Bay, improves his health, allows him to spend  time recreating with family and gets him away from the hustle and bustle of urban life.

You can “get lost in the actual beauty of the Bay,” he said.

His love for the trail helped make Corleone the winner of a contest celebrating the 30th anniversary of the Bay Trail. The "Share Your 30" contest invited trail users to post short videos or slideshows on social media about their experiences.

Maxwell biked and shared his journeys on the trail via Instagram (@maxwellcorleone) on several East Bay trails. Corleone won a bike, which he will give to his wife so his whole family can bike the trail.

The contest received 102 social media entries showcasing the many ways that visitors enjoy the trail. Posts included biking, bird watching, running, photography and getting in touch with the natural beauty of the Bay. Prizes were donated from the Woodside Bike Shop, Oakland A’s, Columbia, R.E.I, C.U.E.S.A, and Patagonia.

Beyond those who entered the contest, "Share Your 30” introduced the Bay Trail to many others through the contest landing page ‒ Baytrail.org/30.

The Bay Trail plan was adopted by the Association of Bay Area Governments (ABAG) in June 1989. Originally envisioned as a “ring around the Bay,” today some 355 miles of trail are built along the 500-mile perimeter of San Francisco Bay. Several major new segments will be inaugurated during this anniversary year, including a path along the upper deck of the Richmond-San Rafael Bridge and the Albany Beach Bay Trail behind Golden Gate Fields in Berkeley/Albany. Stay tuned to the Bay Trail website for announcements of future events at baytrail.org.